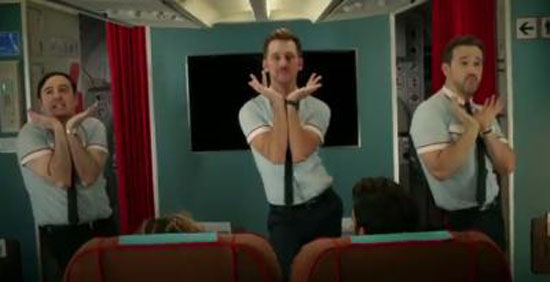 Fiddle around with the emergency exit, then ask a fellow passenger if he has a crowbar

Go into the bathroom and make rude bodily noises, then come out looking refreshed

Pretend you are an aviation expert, tap at the windows, saying “Looks pretty tough” then ask somone if they have a bat you could use to test.

Disco dance in the aisle

Mess up your hair, untuck your shirt, basically look crude, and mingle with a first class guy as if you were long-lost friends

Lead a bible study session in the back of the plane

Tell the person next to you your life story, from DNA to that afternoon

With the person next to you, discuss cannabilism among airline crash passengers on deserted islands

Show off your Batman underwear

Switch accents and see if anyone notices

Put on a ten foot diameter sombrero and slouch in your seat, whacking everyone on the head

Go into the cockpit, flick on the intercom light, then loudly inquire as to why the fuel dial says “e”

Go into the cockpit, ask the pilot in an obnoxious voice “Why do the call it the COCKpit?” then snort as if it’s the funniest thing in the world

Listen to James Brown on your iPod, sing along (especially the “Oooh Oooh” parts)

Wear a hairpiece and switch it often, seeing if anyone notices

Scream and dive under your seat for no apparent reason

With a desperate look, ask the stewardess where the bathroom is, then look relieved and say “Nevermind. Do you have any towels?”

Jump up and scream “AAAHHH!! I left the stove on!!”

Ask someone for their autograph, pretending that you think they’re Kevin Costner or Goldie Hawn (This best when the person looks nothing like the movie star in question)

With a fellow passenger, Re-enact the disco scene in “Airplane!”

Get some rub-on tattoos and a leather jacket, pretend that you belong to a biker gang