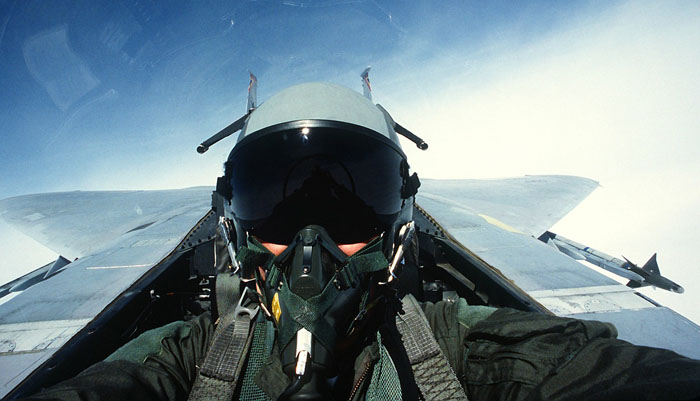 1. As an aviator in flight you can do anything you want, as long as it’s right! And, we’ll let you know if it’s right after you get down.2. You can’t fly forever without getting killed.

4. Success is being able to walk to your Flying Evaluation Board.

5. There are Rules and there are Laws. The rules are made by men who think that they know better how to fly your airplane than you. The Laws (of Physics) were made by God. You can, and sometimes should, suspend the rules but you can never suspend the Laws.

6. More about Rules:
a. The rules are a good place to hide if you don’t have a better idea and the talent to execute it.
b. If you deviate from a rule, it must be a flawless performance. (e.g.: If you fly under a bridge, don’t hit the bridge.)

7. The fighter pilot is the highest form of life on earth.

8. The ideal fighter pilot is the perfect blend of discipline and aggressiveness.

9. About check rides:
a. Having someone climb into your fighter to grade how you fly is just like having someone come into your bedroom to grade you.
b. The only real objective of a check ride is to complete it and get the character out of your airplane.
c. It has never occurred to any flight examiner that the examinee could care less what the examiners opinion of his flying ability really is.

10. The medical profession is the natural enemy of the aviation profession.

11. The job of the Wing Commander is to worry incessantly that his career depends solely on the abilities of his aviators to fly their airplanes without mishap and that their only minuscule contribution to the effort is to bet their lives on it.

12. Ever notice that the only experts who decree that the age of the pilot is over are people who have never flown anything? Also, in spite of the intensity of their feelings that the pilot’s day is over I know of no such expert who has volunteered to be a passenger in a non-piloted aircraft.

14. He who demands everything that his aircraft can give him is a pilot; he that demands one iota more is a fool.

16. It is solely the pilot’s responsibility to never let any other thing touch his aircraft.

17. If you can learn how to fly as a Lt and not forget how to fly by the time you’re a Lt Col you will have lived a happy life.

18. About night flying:
a. Remember that the airplane doesn’t know that it’s dark.
b. On a clear, moonless night, never fly between the tanker’s lights.
c. There are certain aircraft sounds that can only be heard at night.
d. If you’re going to night fly, it might as well be in the weather so you can double count your exposure to both hazards.
e. Night formation is really an endless series of near misses in equilibrium with each other.
f. You would have to pay a lot of money at a lot of amusement parks and perhaps add a few drugs, to get the same blend of psychedelic sensations as a single night weather flight on the wing.

19. One of the most important skills that a pilot must develop is the skill to ignore those things that were designed by non-pilots to get the pilot’s attention.

20. At the end of the day, the controllers, ops supervisors, maintenance guys, weather guessers, and birds; they’re all trying to kill you and your job is to not let them!

21. The concept of “controlling” airspace with radar is just a form of FAA sarcasm directed at the fighter pilot to see if he’s gullible enough to swallow it. Or to put it another way, when is the last time the FAA ever shot anyone down?

22. Remember that the radio is only an electronic suggestion box for the fighter pilot. Sometimes the only way to clear up a problem is to turn it off.

23. It is a tacit, yet profound admission of the pre-eminence of flying in the hierarchy of the human spirit, that those who seek to control aviators via threats always threaten to take one’s WINGS and not one’s life.

24. Remember when flying low and inverted that the rudder still works the same old way but hopefully your IP never taught you “pull stick back, plane go up”.

25. Mastering the prohibited maneuvers in the dash-1 is one of the best forms of aviation life insurance you can get.

26. A tactic done twice is a procedure. (Refer to unpredictability discussion above)

27. The aircraft G-limits are only there in case there is another flight by that particular airplane. If subsequent flights do not appear likely, there are no G-limits.

28. One of the beautiful things about a single piloted aircraft is the quality of the social experience.

29. If a mother has the slightest suspicion that her infant might grow up to be a pilot she had better teach him to put things back where he got them.

30. The ultimate responsibility of the pilot is to fulfill the dreams of the countless millions of earthbound ancestors who could only stare skyward and wish.