In what may be a first in the aviation world a student has crashed a multi-million dollar simulator.

Buba Jemmah came from Gambia in Africa with dreams of being an airline pilot, but his dreams came crashing to a halt only two weeks into a month-long training process at SimFly in Florida when the simulator he was controlling rocked off its base and crashed to earth.

“This is unprecedented”, said James Tavern, president of Sim Fly. “Nothing like this has ever happened in the aviation training world. These things are bolted to the floor”. 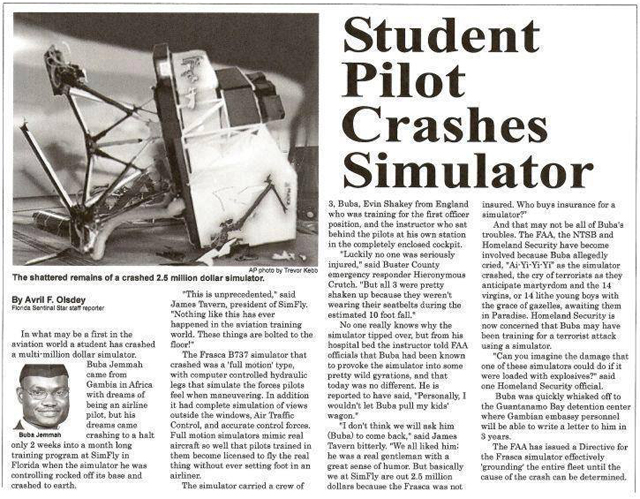 The Frasca B737 simulator that crashed was a ‘full motion’ type, with computer controlled hydraulic legs that simulate the forces pilots feel when maneuvering.

In addition it had complete simulation of views outside the windows, Air Traffic Control and accurate control forces. Full motion simulators mimic real aircraft so well that pilots trained in them become licensed to fly the real thing without ever setting foot in an airliner.

The simulator carried a crew of three, Buba, Evin Shkey from England who was training for the first officer position, and the instructor who sat behind the pilots at his own station in the completely enclosed cockpit.

“Luckily no one was seriously injured” said Buster County emergency responder Hieronymous Crutch. “But all three were pretty shaken up because they weren’t wearing their seatbelts during the estimated ten foot fall.”.

No one really knows why the simulator tipped over, but from his hospital bed the instructor told FAA officials that Buba had been know to provoke the simulator into some pretty wild gyrations, and that today was no different. He is reported to have said, “personally, I wouldn’t let Buba pull my kid’s wagon”.

“I don’t think we will ask him to come back” said James Tavern bitterly. “We all liked him: he was a real gentleman with a great sense of humour. But basically we at SimFly are out of 2.5 million dollars because the Frasca was not insured. Who buys insurance for a simulator?”.

And that may not be all of Buba’s troubles. The FAA, the NTSB and Homeland Security have become involved because Buba allegedly cried ‘Ai-Yi-Yi-Yi’ as the simulator crashed, the cry of terrorists as they anticipate martyrdom. Homeland security is now concerned that Bubab may have been training for a terrorist attack using a simulator.

“Can you imagine the damage that one of these simulators could do if it were loaded with explosives?” said one Homeland security official. Buba was quickly whisked off to the Guantanamo Baby detention centre where Gambian embassy personnel will be able to write a letter to him in three years. The FAA has issued a Directive for the Frasca simulator effectively grounding the entire fleet until the cause of the crash can be determined.

Chuck, is that you?